Which air conditioner system should I buy? The answer to depends on many factors, factors that we must take into account if we want to make full advantage of it. We should know for example how large the area is or the total heat generated inside the enclosed room,  among other things.

There are basically four air conditioner units. And the most commonly used is the Window Air Conditioner used for a single room and fitted in a window sill. We would recommend it when you have to cool a small flat or an office for rexample.

Then you have the Split Air Conditioner which can be used to cool one or two rooms. It comprises two parts; the indoor unit and the outdoor unit. Furthermore, they have an aesthetic appeal as they do not need as much space as the previous one. And they can also be used in larger flats, offices, or even in a small house.

The Packaged Air Conditioner,  which is the third type, can be arranged in two ways (all the components being housed in a single box; or, on the other hand, being housed in one casing). This one is bought to cool more tan two rooms either in your house or in your office (just to name some). The difference with the previous one is that if you buy the Packaged Air Conditioner you have the possibility to house all its parts in only one place instead of having different units in different parts of your flat, house or building you need to cool. 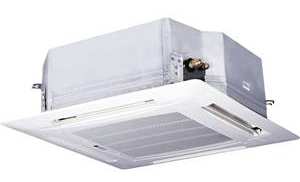 The last one is the so called the Central Air Conditioning System used when the whole building has to be air conditioned (eg: movie theatres, gyms, hotels, offices, factories,…). The problem when having to cool such large areas is that if we put individual units in each room it is very expensive and then installing central air conditioners seems the most sensible idea. And what is more, in terms of capacity we have to say that this one has a huge compressor that works cooling malls, galleries, etc.

We could also talk about another air conditioner system. The one whose cost is lower and reliable. We are talking about the Solar Powered Air Conditioning. A good solution for big enterprises that want to save money. They are usually installed using gas boilers or also by harnessing waste heat from generators or other sources which makes the cost very low. As we said before,  it is mainly installed in huge areas and by big companies, but it does not mean that it can not be bought for smaller places. In fact, the number of people installing solar panels for their air conditioners is increasing as we are becoming more aware of the environment.

Do you want to buy airconditioner and you do not know which one to choose? Our recommendation is to go to a reliable and official shop and ask the professionals. Meantime, do not forget the few tips we have just given to you.